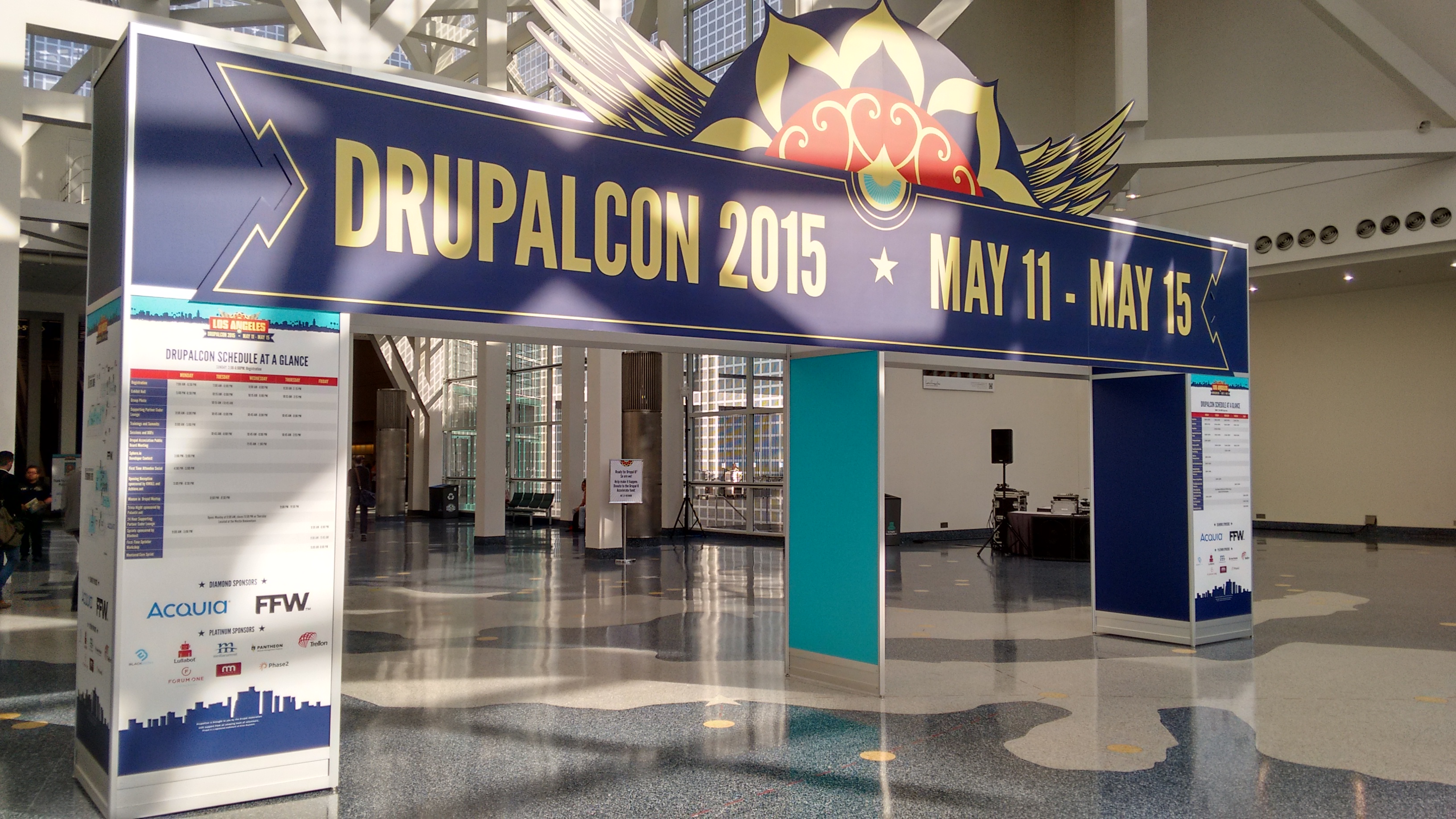 Hi, in this special post I'll talk about of some of the things that have happened here at DrupalCon LA 2015, the most important Drupal event, organized by Drupal Association and sponsored by various big companies like Acquia, FFW (Pro-people + Blink reaction), Pantheon, Black Mesh, Lullabot, Phase 2 and many more. Drupalers from all around the world come to this event to share they knowledge, know potential clients, get in time with all Drupal-related events and the most important I think: the development of Drupal 8, which has a lot of great new features and it's getting closer to its first release candidate! It's only missing 28 critical issues to be fixed to achieve this milestone and this week some of them could be solved. So here is what has been happening at the DrupalCon. 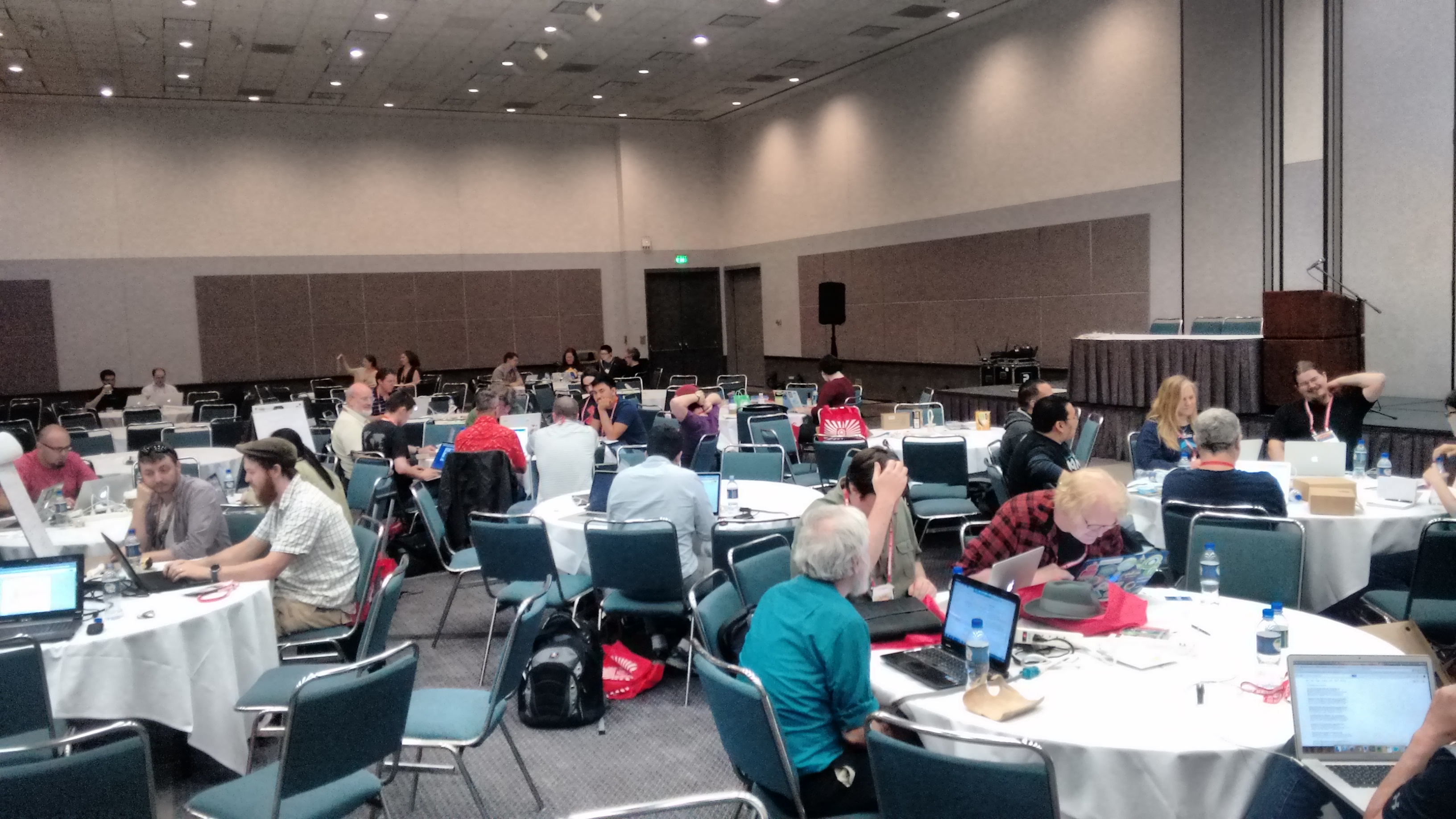 The teams formed at the community summit

The issues that are being taken by the dev team so far are jquery and UX issues with a sort function at a dynamic schedule table to let admin to build an schedule for his event. The other one is a simpler issue to develop a formatter that allows session owner label to be displayed with user's last name rather than its username

After 4 hours of hard work and asking guys on the team every 4 second, I finally finished the issue, Matthew Connerton (mrconnerton), from Aspiring Web will review it later and luckily, merge it into drupal.org! Now let's rock and roll for another issue 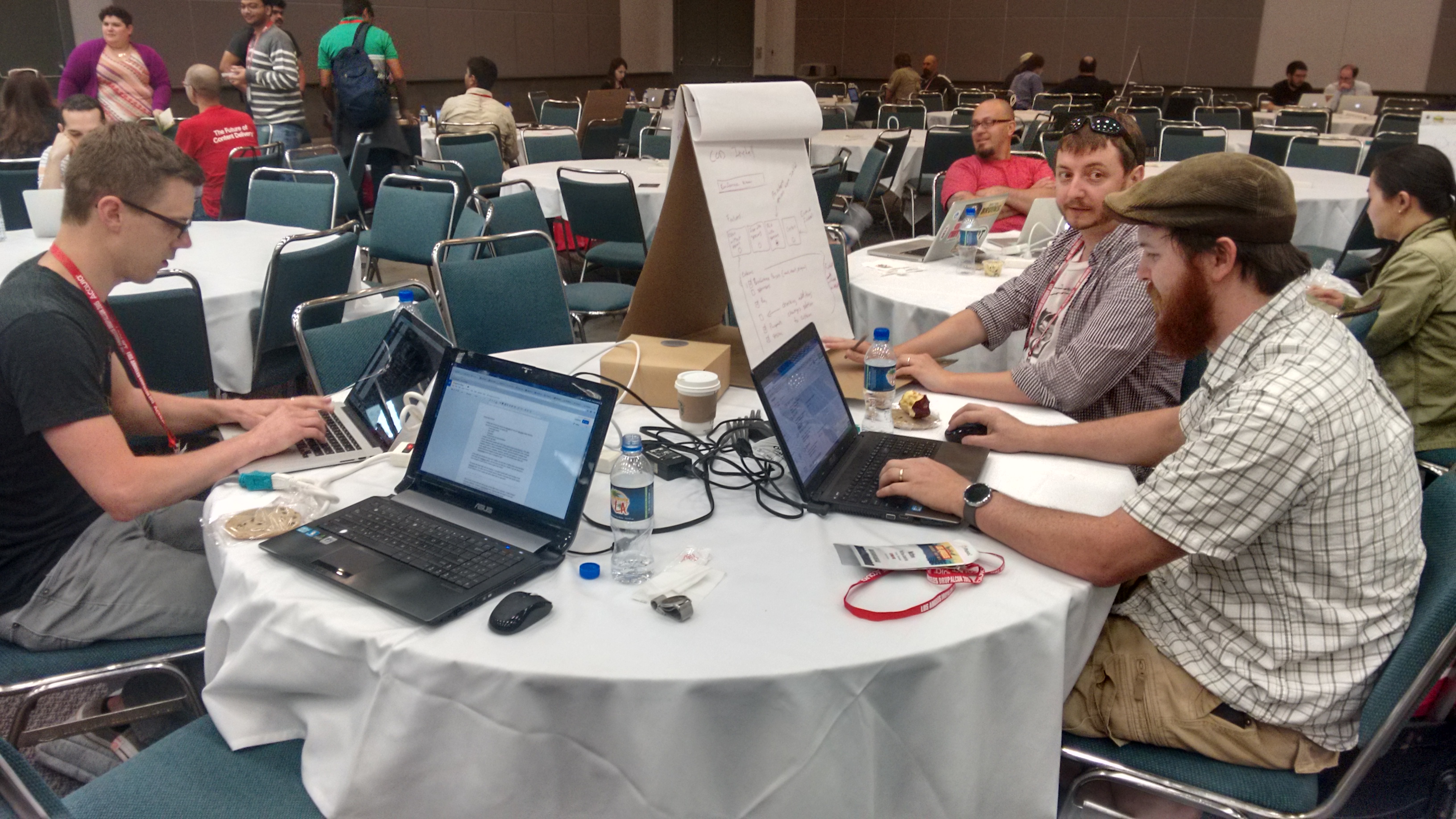 At the end of the summit, every team talked about its results and the way this summit helped not only the teams but also to drupal itself, mentioning groups, solving common community problems, documentation issues and sent patches ready for review. The community policy group sketched a workflow to handle conflicts at discussions around the community, and it has been uploaded here.

As the summit is over, all left for me is the extended sprints, groups of people that join together to achieve a goal, being in most cases solving issues for the future drupal 8 core. 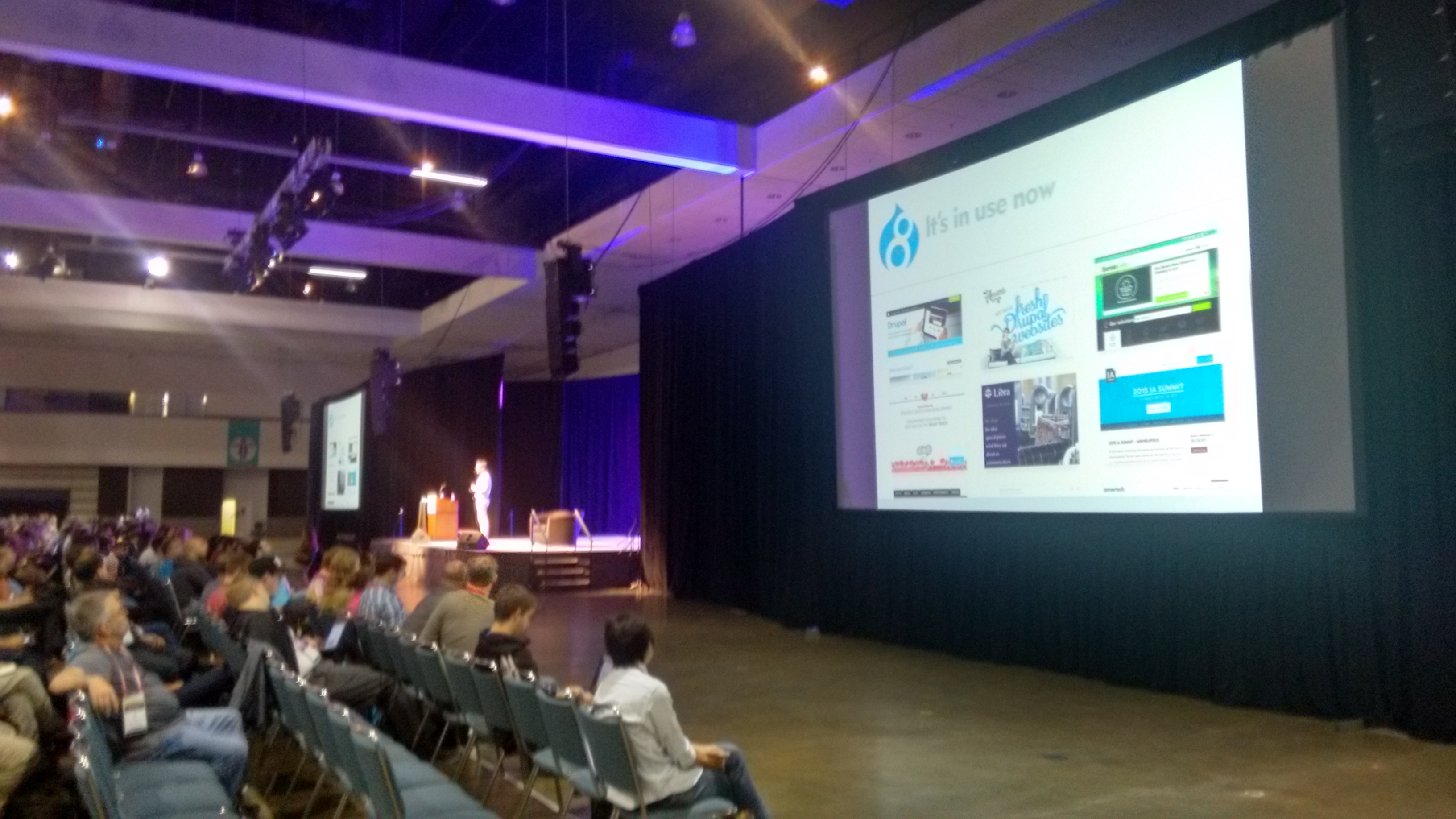 Keynote: Dries Buytaert speaking about the state of Drupal 8

This was the opening made by the founder of Drupal Project. Dries spoke about the history of Drupal and the lessons he learned on the path, these lessons where the following:

Just a nice place where lots of companies and organizations have an spot to talk about what they offer, there are also contests for winning nice stuff, these companies weren't only Drupal companies but also found open source software representatives like MySQL, companies working with open source projects like Sensio Labs (creators of Symfony and Sylex), training companies like Lullabot, etc.

This workshop shows some of the goodies that Drupal 8 brings for new developers and how not to be scared if coming from Drupal 7. Larry Garfield mentioned which items are taken from Symfony to make Drupal 8 to work and what do you need to learn to ramp up at Drupal 8 development. He explained everything about Drupal 8 using a basic project to throw up a page, a theme, a configuration form, a page form, etc. Stuff is here.

Michael Schmid from AmazeeLabs tries to show us that Drupal 8 at this point is ready to be used on some kind of projects, and they proof it showing sites made by them with Drupal 8:

They have work even using multilingual sites, and it seems to work awesome, they just mentioned some caveats trying to use Entity translation alongside the Revision module, they still can't be used together. However, translation out of core worked without problems for them.

Some stuff he suggest us is to be creative, since there are lots of important contrib modules that still needs to be ported, as they aren't, the way Drupal 8 is built allows it to be more extendable and can achieve at least in a basic form some functionalities of those missing modules, for example: Nodequeue module is not ready for Drupal 8, however this functionality can be achieved using entity references and order and filter by a field's weight.

Drupal 7 site builders pick it up in 2 hours: if already know about d7, there are only some stuff that actually changes, but those little changes allows drupal to be even more customizable

Michael says us to don't be afraid to use Drupal 8, it's ready to be used, however it's better to use if site is new or if project is being migrated from another project, if you are already working on a Drupal 7 site and would like to port it to Drupal 8, or if you need strongly the use of a heavy contrib module like Panels or Organic groups, it's better to wait until the release.

One important note: security team doesn't carry up any issue for Drupal 8, so it's recommended that you provide infrastructure security before you start working with Drupal 8, so if site gets hacked, it would just affect the site itself.

Its a microframework based on symfony's very basic components. This was a very technical workshop to show how in 1 hour develop a Web app that serves a basic webpage with users, caching, error handling, and HAL responses (an extended JSON format). The speaker was Larry Garfield and was hosted by Sensio Labs.

The entire tutorial used to explain Sylex is here.

Scott Reeves and Joel Pittet not only explains how to work on this, but also shows what's the status on theming, actually on the current beta of Drupal 8 (beta 10) there are only 12 theme functions remaining, they are meant to disappear, the phptemplate engine is still there but is being progressively unused, maybe on future Drupal versions it would disappear completely. 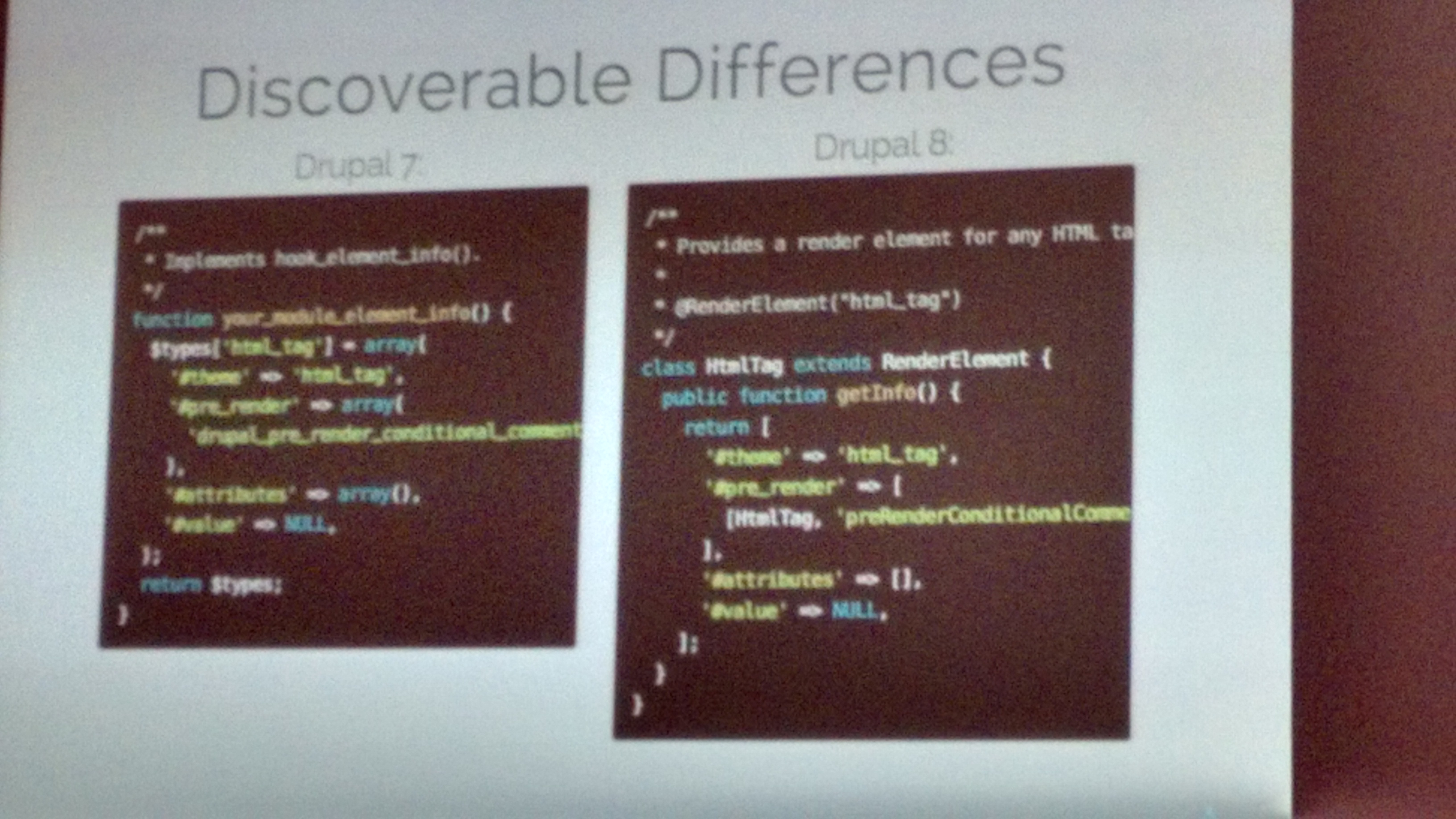 Lots of stuff changed its way to work at theming, Theme suggestions still work, but those are there only to let twig to act depending on what s defined on a render array, which are still be used but they doesn't need to be wrapped around a theme() function. Now render arrays directly use #theme as an item to recognize the twig template to be used, hook_theme is used to define where to build render array and generate it with twig.